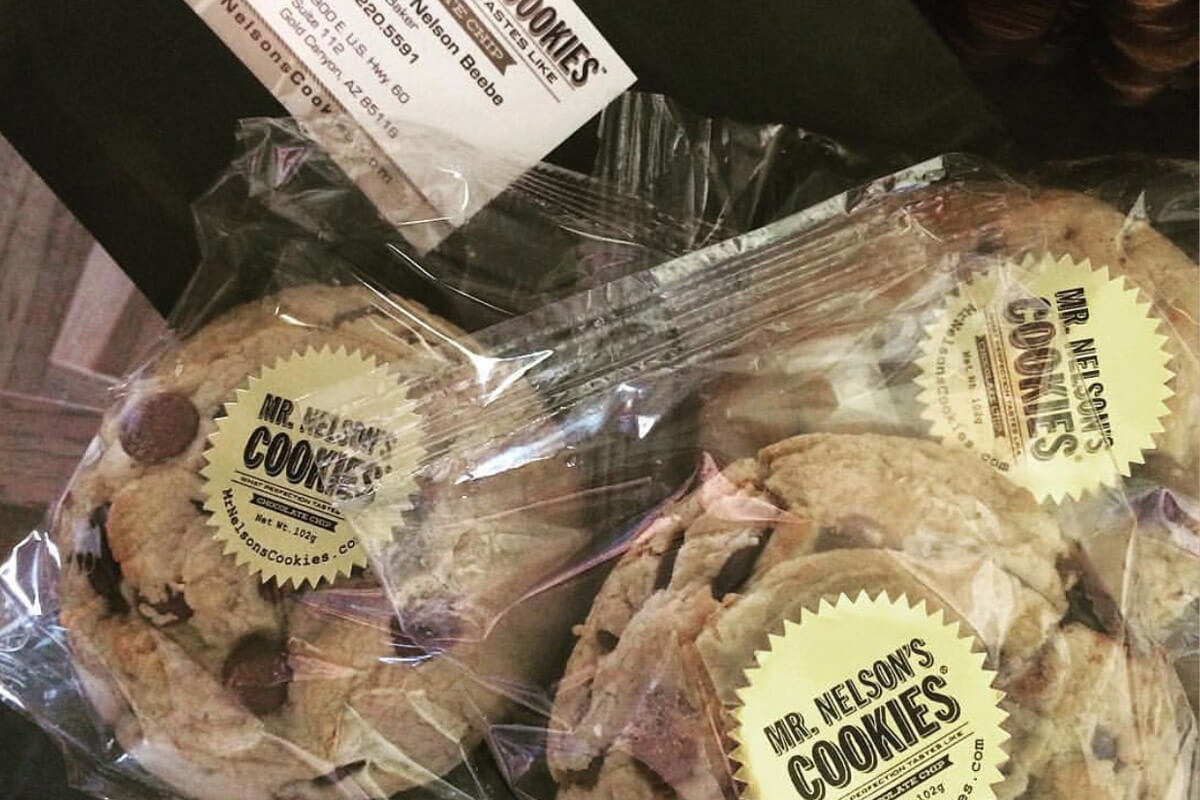 “My very best day in corporate America is yet to rival my worst day in my bakery.” Boom. The end. Which subsequently became the very best beginning for Mr. Francis Nelson, owner and sole employee of Mr. Nelson’s Cookies.

Mr. Francis Nelson Beebe a.k.a. Mr. Nelson, is an artisan baker who found his calling in life upon retiring from a 30-year career at a consumer products company. Mr. Nelson’s story is simple and fantastic. Just like his signature chocolate chip cookies which have become his life’s work, infusing his days with more joy and fulfillment than he ever imagined.

Mr. Nelson grew up in South Jersey in a loving home with a mom who held the 1942 state’s title for cooking champion. You could say Mr. Nelson was a (chocolate) chip off the old block however, he did not discover his love for the kitchen (bakery in this case) until several years into his retirement. Deciding he just couldn’t play golf and travel into the sunset any longer, Mr. Nelson heeded the encouragement of family and set out to create the “World’s Perfect Chocolate Chip Cookie, guaranteed.” Baking was a familiar pastime for Mr. Nelson.  As a single father many years ago, he often made cookies for his son. The sweet treat was a constant source of comfort that transcended far beyond a simple snack for both.

Recreating the nostalgic connection of his son’s youth was the motivation behind opening his baking company in 2014, and Mr. Nelson has been serving up (approximately 90k to date) cookie nirvana ever since.

Sidebar: I am a cookie snob. I LOVE LOVE LOVE chocolate chip cookies. In college, I considered tattooing a chocolate chip cookie on my right ankle. I have since matured and share this teachable moment (don’t do it) to accurately convey my obsession with my favorite food group.  It was Keebler Soft Batch cookies all the way— between classes I could be found in my BFF’s apartment microwaving those babies to gooey perfection. I have since acquired a more sophisticated palate hence, it is fair to consider myself a subject matter expert for this article. A+ for me!

So, you can imagine when Mr. Nelson’s public relations rep reached out to me about interviewing AND SAMPLING Mr. Nelson’s product, I didn’t exactly slow-play the pitch during my company’s editorial meeting.  Personal bias and a half dozen chocolate chip cookies aside, I pinky swear that I explored the pitch because I had to know what’s in Mr. Nelson’s famous recipe that keeps fans coming back for more.

The answer? It’s a secret. But, of course. However, the Le Cordon Bleu trained chef did share that he spent six months perfecting his recipe and that he only uses the finest ingredients including Ghirardelli Chocolate chips. He also told me that the real magic happens in the process. Mr. Nelson said that success in baking boils down to the order in which ingredients are added, timing, sequencing and certainly temperature and equipment come into play too. His proprietary formula is whipped up in his beloved 1950s inspired bakery and shipped nationwide year-round.

Operating at the base of the Superstition Mountains in Gold Canyon, Arizona, Mr. Nelson’s bakery is his happy place. He personally makes and wraps exactly 24 dozen perfect chocolate chip cookies a day, four days a week. Why 24 dozen? He told me it’s what he’s capable of doing while not compromising his standards. He does not ship internationally because his cookies are best when consumed within a day or two upon receipt (no problem here!) and his personalized, handwritten note included with each batch is a nice touch. Mr. Nelson knows how to set the stage for a warm, genuine experience before the first taste. Keebler, it’s time to up your game.

The cookies are simply divine. To rule out any inconsistency in my research I properly tested each individually wrapped cookie. In front of my three kids. I eventually shared the sweet treats as the cookies are rather filling and well, there’s that whole ‘kids learn from their parents’ thing. The verdict? Kid tested and mom approved. Thumbs up all the way around.

Mr. Nelson’s chocolate chip cookies are also made gluten-free and are nearly identical in appearance, taste and texture to the non-gluten-free cookie. The GF version accounts for 40% of Mr. Nelson’s cookie sales and although the GF cookies cost eight-times more to produce, the baker told me he does not pass this pricing on to his customers. A pack of six cookies is $30 and a dozen cost $58.  Shipping methods vary, keeping in mind time is of the essence to maintain the fresh baked factor. Mr. Nelson’s cookies are available online and on Friday’s at the Gold Canyon bakery if pre-ordered two days in advance. I see a road trip in my very near future.

It was such a pleasure getting to know Mr. Nelson and his cookies. As our interview wrapped I asked if he had additional flavors in the works (there’s always hope) to which he replied, “not at this time.” I get it. Why mess with perfection, right? At the end of the day,  Mr. Francis Nelson is finally living out his sweet dream— one cookie at a time.