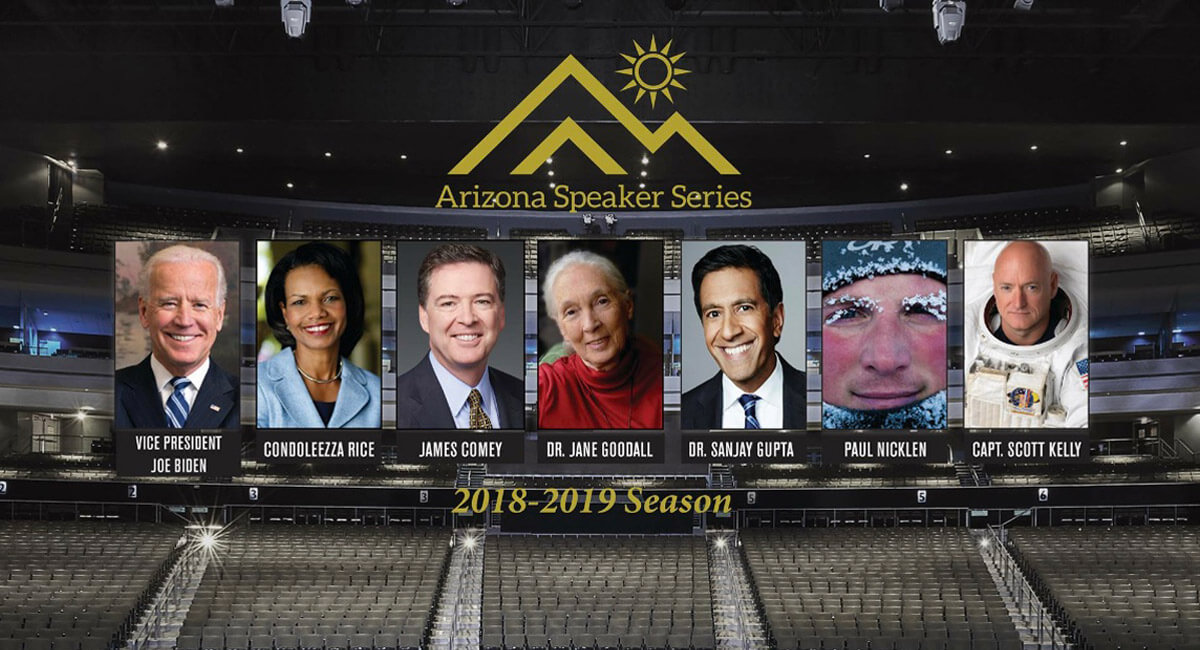 What do you get when you bring together major luminaries of our time, nearly five-thousand open minds and (if you please) a cocktail in hand during a night out with your fave +1?

Here’s a hint–and much to my son’s chagrin–the answer is not a Travis Scott concert. It’s the Arizona Speakers Series and the inaugural season is in full swing, proving to be one of the hottest tickets in town. New to the Valley, the series is a collection of seven well-known leaders from a myriad of industries/professions who take listeners on an emotional and somewhat revealing ride with stories of their life and life’s work.

The 2018/19 lineup is impressive: Vice President Joe Biden, Condoleezza Rice, James Comey, Dr. Jane Goodall, Dr. Sanjay Gupta, Paul Nicklen and Capt. Scott Kelly. Over the course of several months, each speaker spends time with the audience talking about their experience and place in history in an entertaining and intimate way. The speakers share hopes and challenges sprinkled with humorous personal narrative from a simple podium at Comerica Theater in downtown Phoenix. The format is simple, and the two-plus hours are captivating. Dare I say seemingly more valuable than a one-nighter with Travis Scott? I can feel my son’s eye-roll as I write this.

I had the pleasure of interviewing one of the series’ co-founders, Gary Lauer, prior to opening night with Dr. Sanjay Gupta. I wanted to get details on the new series of course, but more than that I had to know the impetus behind the brilliant idea to gather some heavy hitters of our time in a non-political, no-agenda way. And full disclosure, if perhaps Madonna was being considered for future seasons (kidding. Maybe.).

Co-founder Gary Lauer shared that the series came about during a conversation with his son and co-founder, Rob Lauer as they pondered the “what ifs” of hearing from icons of our time while bringing community together. Simplicity and thought-provoking was the goal, mixed with an essence of vulnerability and light-heartedness. The father/son team got to work, gleaned from their professional experiences and contacts from the past and voila! The series was born in a relatively short amount of time.

Launching their first sold-out series in Park City, Utah earlier this year, the father/son duo knew they had a hit on their hands and looked to expand to Phoenix. With minimal outreach and advertising, word-of-mouth ensued and the inaugural Phoenix season sold-out quickly.

When I met up with Mr. Lauer he was calm, cool and collected despite opening night just one and a half days away. Mr. Lauer graciously chatted with me for quite some time about future seasons, expanding into multiple markets, Madonna (kidding. Maybe) and the ‘be present now’ atmosphere of each event which is truly magical. Recording of any kind is not permitted during the speakers’ time on stage—by the organizers, attendees, media—zilch, zero, nada. The audience is respectively asked to put their phones away and get lost in a  conversation which mimics a living room chat. The intent? To soak up the goodness and fully tune in for two-plus hours. According to Mr. Lauer, the speakers love the format and from my experience on opening night with Dr. Gupta I can attest, it was lovely all the way around.

Mr. Lauer also shared about the founders’ high school give-back program which provides opportunity for underserved high school students to attend the series. Tickets are sold for the entire season—all seven nights—attendees who can’t make one of the evenings can simply ‘give back’ their ticket to the series. In turn, Lauer and team reach out to an underserved local high school and offer the ticket(s) to a young adult. Hearing Mr. Lauer explain the simple, yet powerful thoughtfulness of this program of course resonated with me—the gesture of giving back may have a profound effect on a young adult and as Mr. Lauer explained, could be the spark that changes the trajectory of a young person’s life. It is truly inspiration at its core.

The night Dr. Gupta opened up the series it was a packed house. The indistinct chatter of the crowd was upbeat and positive. The audience hung on to nearly every word of Dr. Gupta’s address which touched upon his career, in-depth experiences from places you and I will most likely never experience while he weaved in stories of his family which left me thinking, we are all much more alike than we are different. The evening wrapped with a lengthy Q+A session submitted by audience members. From questions about his evolved stance on cannabis to cures for cancer, the subject matter was deep and emotional as the audience (including me) more than likely applied a personal lens to the dialogue.

At the end of the evening, I met up with Dr. Gupta during the VIP event. We chatted briefly about a mutual concern for our children; the digital world they live in and how to navigate it as parents. The chief medical correspondent for CNN didn’t have an answer. Yep, definitely much more alike than we are different.

As I left Comerica that evening I felt empowered, enlightened and grateful for a new kind of night out and experience. I thought about Mr. Lauer, his son Rob and the team behind the scenes who went all in to bring the series to life—truly a dream come true for them and perhaps the launch of a new dream for a high schooler in the audience that evening.

The following morning I was eager to tell my kids all about what I learned and insight that may spark an interest or incite questions. Guess which of my three kiddos asked the most questions including if he could be his mama’s +1 when Dr. Jane Goodall takes the stage in March? Thank you, AZ Speakers Series. I’m looking forward to an inspiring night with my twelve-year-old son. Just after I take him to see Travis Scott in December. An open mind is a beautiful thing.

For more information on the Arizona Speakers Series visit arizonaseries.com 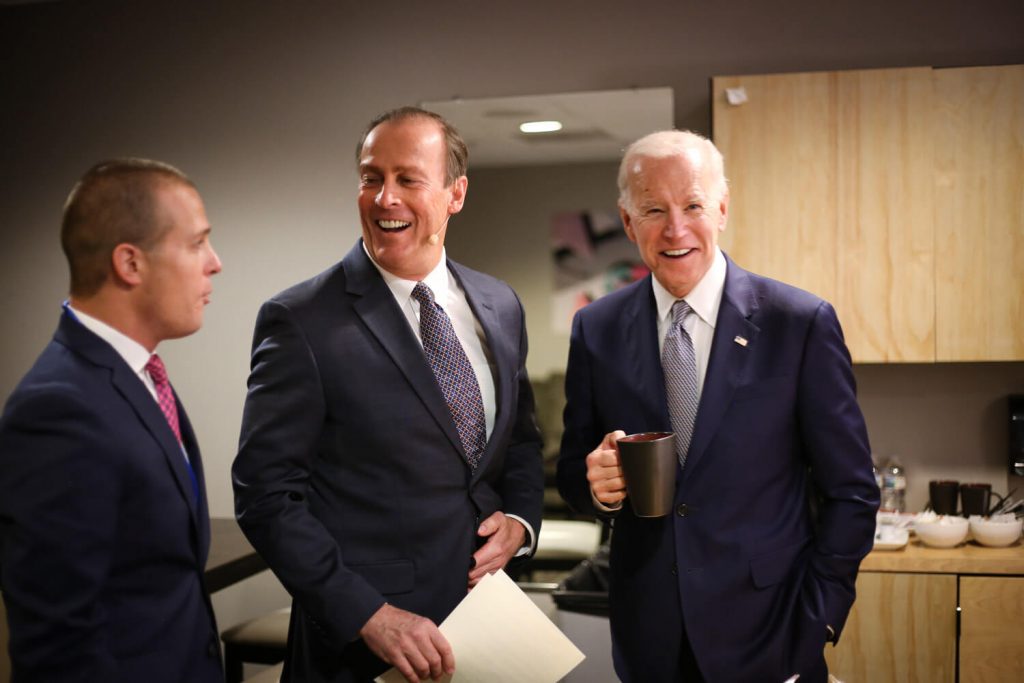 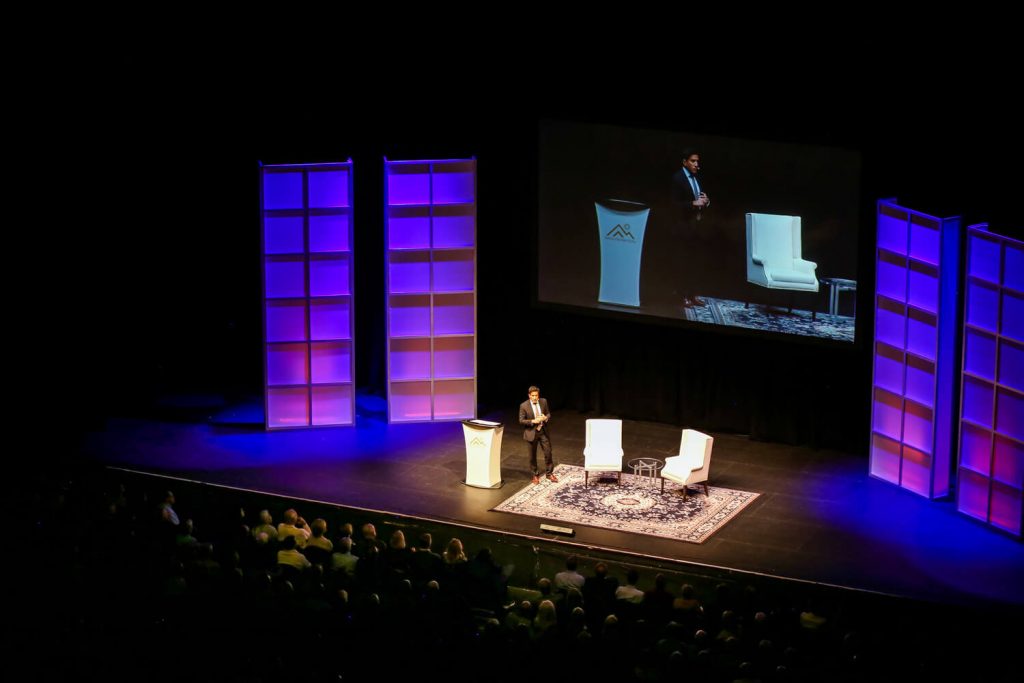 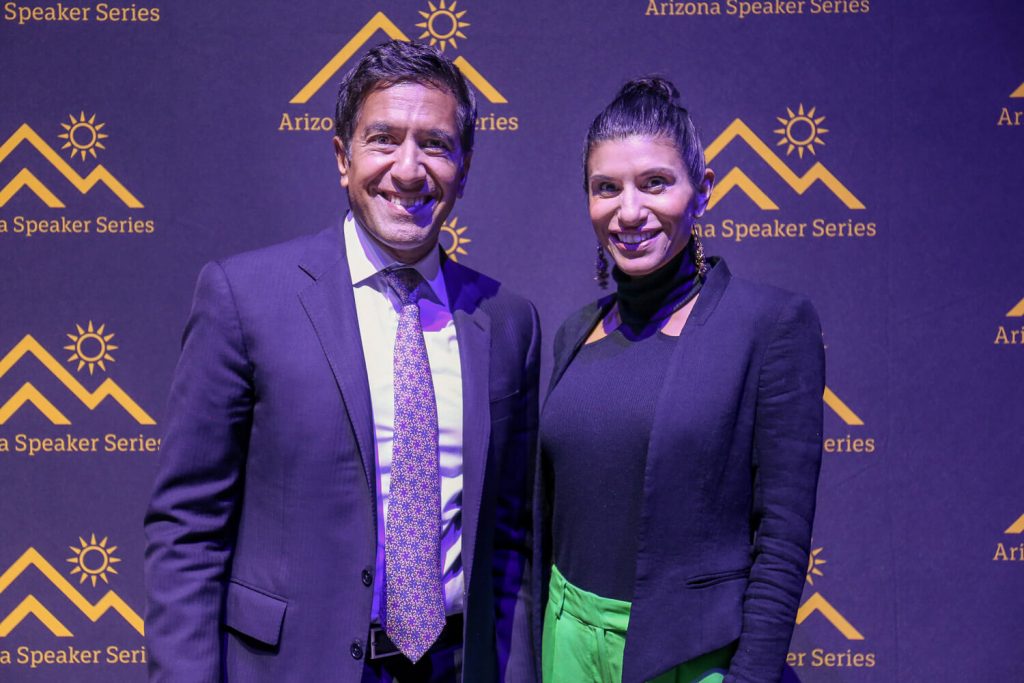 Healthy Through the Holidays
December 11, 2017