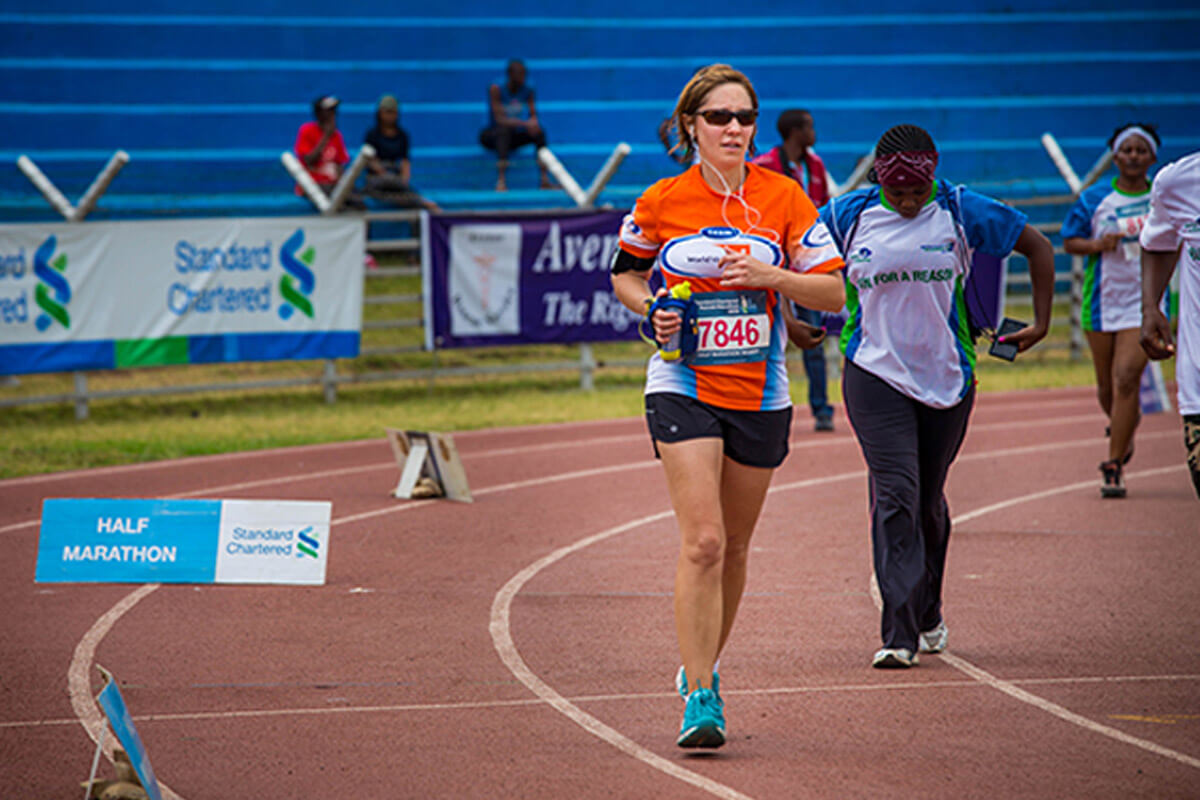 I love to run. Straight to my pantry―just after tucking in the last kid at night. I’m fast like lightening as my stride quickens, running away from my hypocrisy straight toward a Little Debbi Swiss Roll. The “kids, that’s not a good choice now, is it?” dessert soothes my soul in record time after a full day.

Needless to say, running isn’t my jam. It isn’t exactly Kristin Boorse’s either. What once was a bucket list bullet point, now serves as fuel to sustain this Phoenix resident’s desire to be the change she wishes to see in the world.

Kristin’s mom, Diane Bonitzer, was killed in 2009 while crossing the street. Kristin was beyond wrecked.  Depression, sadness, and despair took hold. Work, kids, life as a whole― felt out of control as she and her family sorted through the various stages of grief. Kristin yearned for a connection to her mom to begin displacing anguish with healing.  Taking up running, Kristin put “one foot in front of the other,” and her path eventually led to Team World Vision (TWV).

Acting upon Diane’s constant desire to care for and serve others, Kristin began running with a purpose through TWV, the athletic fundraising arm of World Vision. The organization focuses on the diminishing root causes of poverty and injustice worldwide. Kristin quickly found her footing with running as a way to raise funds to provide clean water for those living in abject poverty in developing countries.

According to Team World Vision (TWV)―the largest non-government provider of clean water in the developing world – water changes everything. As the first step in the puzzle of poverty Kristin learned that water, the seemingly simple necessity for life, was elusive for many in developing nations. An issue she imagined her mom would want to rectify, quickly became inspiration for Kristin to make positive change in the world―while simultaneously keeping Diane’s legacy alive.

Kristin’s course was set. Running sponsored races with TWV, Kristin began fostering community change in Asgede, Ethiopia by raising funds for sustainable, sanitary, life-giving water projects that provide clean water sources and access points for poverty stricken communities. Instead of spending the day fetching water children are able to attend schools, and human trafficking occurrences decrease. Per TWV, better health and improved nutrition are the result of sanitation and hygiene solutions such as: building latrines, hygiene education, and informing community members on the importance of hand-washing.

As Kristin’s miles add up, so does the progress. According to Unicef and the World Health Organization, people without access to clean water has decreased to 663 million in 2015, compared to 884 million in 2010.  Kristin, along with countless other TWV volunteers, is creating positive change. It is this forward momentum that propels Kristin in her desire to continue to care for and serve others―just like Diane.

In approximately one month Kristin will run 26.2 consecutive miles. In conjunction with TWV, Kristin is taking on the Chicago Marathon to provide sustainable water for 1,000 children. Kristin is running to honor her mother’s life legacy while keeping a steady pace toward positive change for humanity. Kristin also continues to heal by putting “one foot in front of the other.”