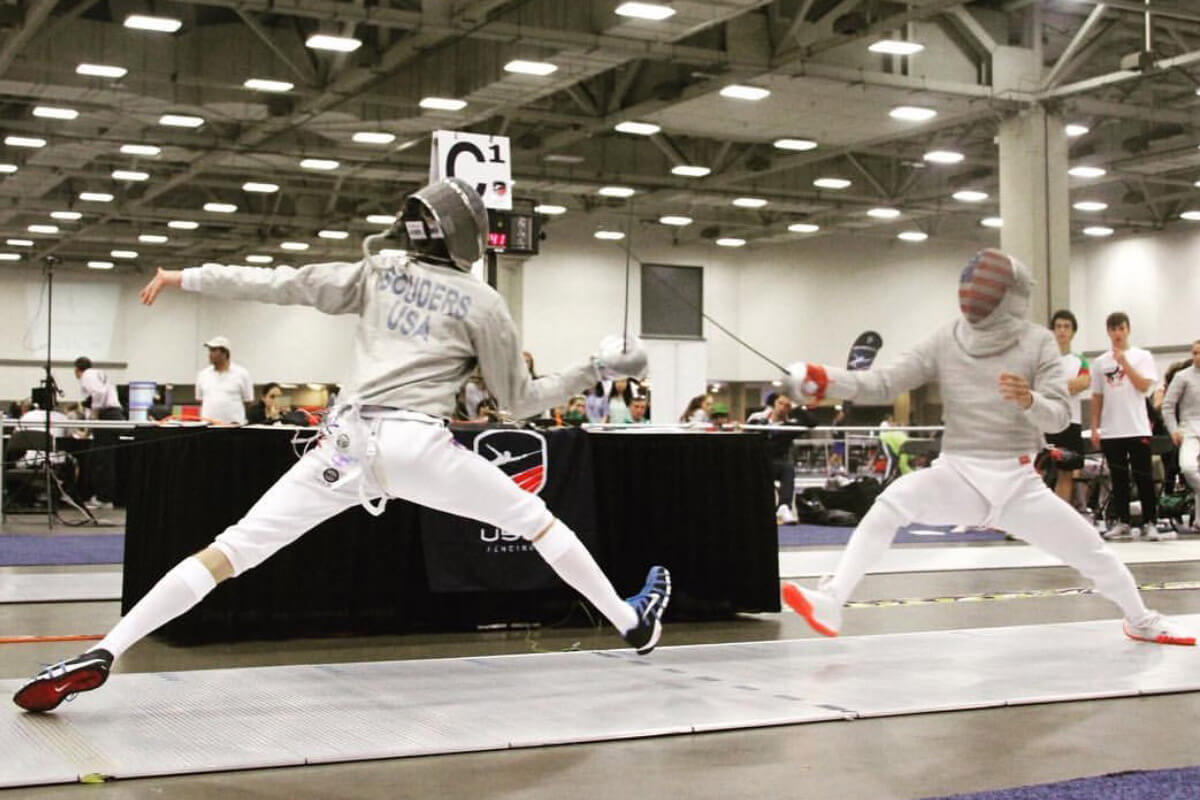 I know what you’re thinking—and I promise, this is a G rated article. Here’s a hint: the scene involves a dapper British spy and a real-life entertainment icon. Need a little more help? Try this:

If you guessed the movie; Die Another Day, be proud! If not, allow me to jog your memory… Die Another Day is the Bond film that put the sexy in sabre and inspired many to lunge, slash and repeat just like Pierce Brosnan and Madonna during the epic fencing battle that unfolds during one of the movie’s best scenes. I remember the clink of the metal swords and the action unfolding on the silver screen like yesterday. Bad *ss and full of class, the actors reignited my interest in the competitive sport of fencing (and perfecting my fake British accent). Yes, it took a decade or so but there’s no time like the present to explore something new.

First up, a little fencing 101: Fencing is much like sword fighting. Originating in Spain, (with developments in France and Italy) and dating back to the 12th century, the sport consists of fighting with swords (aka: flexible steel weapons) a set of rules, and a ton of skill used to “tag” the opponent. The action takes place on a fencing mat measuring 46 feet long and 6 feet, 7 inches wide. The sport is monitored electronically and is described as a human chess match by some. It involves agility, strength, coordination, balance, and timing and (take note of this trivia nugget) was one of the original nine sports in the inaugural modern Olympic Games played in Athens, Greece in 1896. It is one of the only four sports that has been featured at every Olympic competition since.

I recently learned that fencing is about opportunity and sacrifice. You gotta get your head in the game! Sophisticated and proper, I love how the sport slices up memories of childish sword battles most of us probably experienced against a sibling or parent at some point in life. Who hasn’t declared, “en garde!” while wielding a kitchen utensil or tree branch against a deserving opponent? Good times!

So why fencing? With summer upon us camps are always a good way to expand horizons for littles; break out a bit. Fencing is not the traditional sport offered to youth (or adults) and for those who aren’t into full contact and enjoy individual style activities, fencing is usually a hit. For me, hands down, fencing had me at the uniform. Truth, I have wanted to suit up since laying my eyes on Madonna in Die Another Day. It just took me 10+ years to get out of my gym mentality and go for it. To that end, I visited a championship fencing training facility in south Chandler with my tween son to learn more about the unique sport and its allure. And of course, get my hands on a crisp, white fencing uniform and mask. I met up with Bill Becker, the owner of the Fencers Club of Arizona where my son and I lunged at the opportunity to spar amidst championship athletes perfecting their craft. We had a quick crash course on the basics and learned that fencing is varied by weapon; epee, foil, saber, and governed by rules accordingly. Becker told me that fencing is an athletic thinking game and can be as competitive (club) or chill (recreational) as desired. Its history and international appeal opens up the entire globe for athletes. Becker’s club has trained youth all the way through college, with many kids moving on to Ivy League schools, fencing their way through their college years. Fencers Club of Arizona athletes have gone on to attend schools including: Columbia, Harvard, Stanford, Princeton and the list goes on. Parents, are you re-thinking club soccer just about now? But I digress.

After getting the rules and how-to’s out of the way it was time for the uniform (insert squeal). Fencers wear layers of protective gear (often traditional white on white) including jacket, glove and head gear. Knickers (fashionistas, think joggers) and straps in all the right places accessorize the uniform in a fashion forward way. Personally, the pièce de résistance for moi is the helmet. The beautiful headdress completely masks the athlete behind the weapon, creating a whirlwind of wonder and mystique about the opponents underneath the sleek protective cover. Simple yet commanding, a fencer’s helmet is a gorgeous blend of fashion and sport I like to think of as athletic runway couture. It was true uniform love prior to first lunge.

And lunge we did! As soon as we took to the mat it was game on! It was hard not to gloat upon schooling my eleven-year-old in front of the pros in the club. You can see a lil’ clip on my INSTA, you may notice my technique needs a bit of work but look at my outfit! And bonus, I WON! My son and I spared a few times on the mat and had a blast. Upon leaving the club, my kid very eerily said, “mom, revenge is sweet.” I think he’s taking a liking to this new sport.

There are two additional fencing clubs in the Valley. One in Mesa and the other in Phoenix; and all are well regarded. Fencers Club of Arizona hosts a summer camp for kids, while classes for youth and adults take place year-round. Classes are approximately $125/month and provide good overall fitness training as drills, while working on technique and basics of fencing.

My kiddo and I are definitely heading back to Fencers Club soon. It’s time to up our game. He wants to learn skills and can’t wait for our rematch (tough guy). I, on the other hand would be happy just walking around in the uniform, wielding a weapon in one hand and a martini in the other. Shaken, not stirred. En garde! 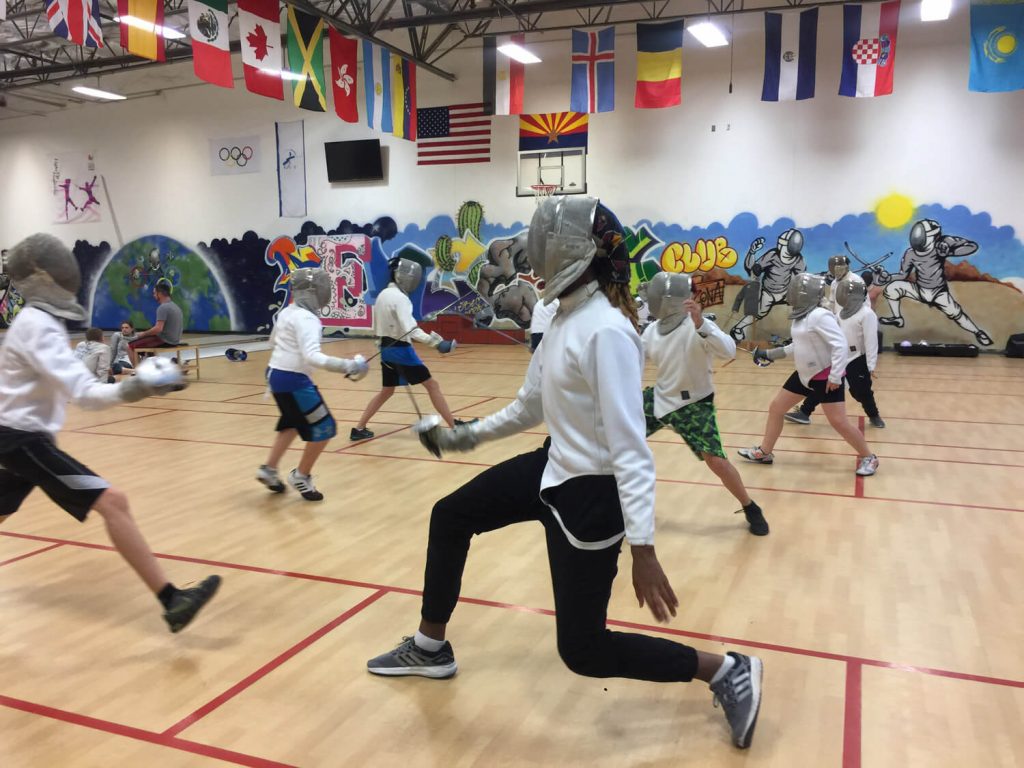 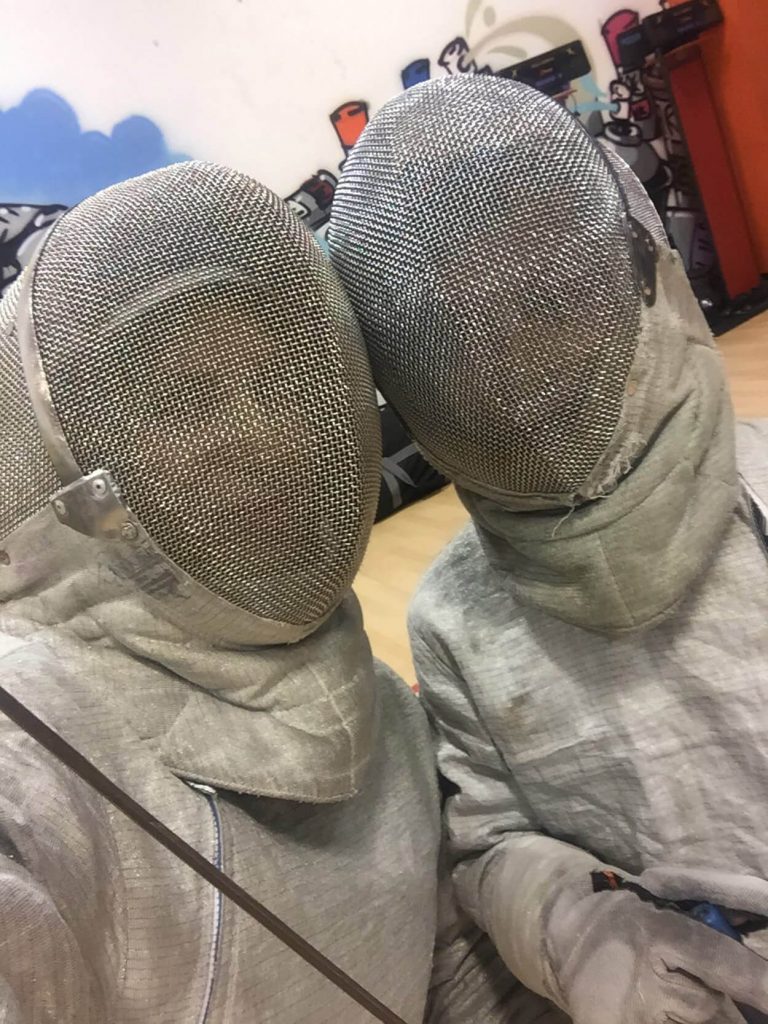