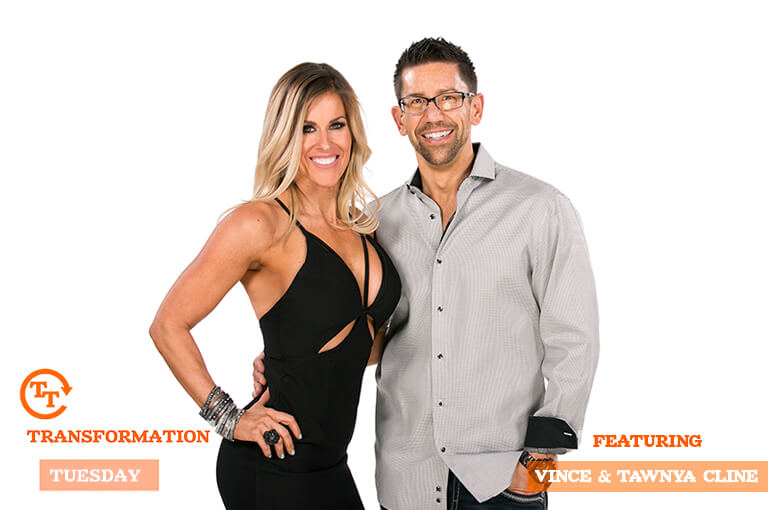 Listen to this Podcast Episode

“Our mission is to change people’s lives by providing the best nutrition, best weight management education, and best products in the world.”

Vince and Tawnya Cline have set lofty goals for themselves, and for the hundreds of people they coach both in person and online.

The Clines have been together for more than 15 years, and went through their own transformational journey as a couple.

Vince Cline, a former college baseball player, says he was walking on the beach in Hawaii when it hit him hard – he needed to lose weight.

He tried various fad diets but nothing worked. That is until someone gave him a program that focused on metabolism.

“Fortunately I met a lady who did something easy for me…. she said follow this and you’ll get results. I lost 12 pounds in two weeks and that’s when I started on this journey.”

Cline realized if a nutrition program focused on metabolism worked so well for him, it would work for others. He began to recreate the program, first for his father and then his father-n-law, and both lost a significant amount of weight.

Tawnya Cline, who didn’t have a weight issue herself, but wanted to become healthier and have more energy, also began following this nutrition program.

The two were so successful that they made nutrition their life’s work, opening up a company called NutritionHead2Toe. http://vtcline.wellnesscoachpro.com/active

Based in Scottsdale, Arizona, the couple continued to branch out coaching people both in person and online.

At the core of everything they teach is how to follow a simple eating plan that will boost your metabolism and give you peak life performance.

On this 32 minute episode of Transformation Tuesday, we talk about how to boost metabolism by following three main rules:

(1) Eat within 30 minutes of waking up
(2) Drink half your bodyweight in water every single day
(3) Eat more frequent, smaller meals

The Clines tell us about foods that will help boost your metabolism as well as the ones you should avoid at all costs.

They also talk about how their lives have radically improved since transforming what and when they eat.

“I was on such high levels of prednisone … and I had IBS which was really embarrassing,” Vince Cline says. “Nobody was holding my hand, I just made a decision that it was something I had to do.”

Changing his nutrition, Cline says, allowed him to discontinue all medications, and he explains it cured his irritable bowel syndrome.

For Tawnya Cline, changing her nutrition (first by cutting out cheese, which she used to love), helped her skin to clear up and gave her a massive amount of energy.

The Clines say they have serious concerns about the overall lack of health and well being in our country, and that childhood obesity is at an all time high.

For their part, they are working to make change by inspiring people to take small steps that lead to big results. “Focus on getting one percent better every day,” Vince Cline says. “It’s progress not perfection.”

Transformational Journey: From Pain And Alcohol To Fitness And Focus
April 23, 2019

Simplicity Is The New Big: 3 Ways To Simplify Your Life with Coach Darleen Santore
January 15, 2019

How to Better Understand Your Health and Empower Yourself
December 11, 2018

Healing From The Inside Out with Raw Food Chef Haley Cloud
November 27, 2018
Go to Top