Derek Weida served in the Army’s elite 82nd Airborne Division on three tours of duty. Being a soldier was his whole life.

“My first two deployments were pretty chill,” Weida says. “But 2007 was different. We were fighting the war and the enemy was bringing the fight to us.”

One particularly brutal firefight changed everything for Weida.

“I didn’t know where I got shot,” he says. “I felt a hot zing go through my calf. I thought I had this really cool Forest Gump flesh wound and i thought I’d be chilling out eating ice cream and hanging out with hot nurses and then I would be back to my job. I woke up in Germany and I was in this hospital room with all these other wounded guys — and i was like wow, this might actually be kinda bad.”

Weida began a long and painful journey, both physically and emotionally. Army doctors tried for years to save his leg. That meant extensive and excruciating rehabilitation. In the end, Weida’s leg would have to be amputated. But the loss of his limb was nothing compared to the loss of his military career, which to Wedia, meant everything.

“I didn’t have PTSD, but I had chronic depression and adjustment disorder,” he explains. “There are a long list of other things that can wrong with you mentally. For some reason, the media, and social media just lumps it all in together. It is completely inaccurate and it drives most of us insane.”

The Army medically retired him, sending Wedia into a dark place. He was depressed and says he lived without hope and purpose.

“I thought because I couldn’t be a soldier anymore, that’s all I had to offer this world, and so I was drinking all the time and fighting, in jail, in psych wards at the hospital, and none of it helped me because i didn’t want to be helped.”

By chance, Wedia saw a Facebook post about a Tough Mudder competition — it may have saved his life.

Weida began to emerge from the darkness. He says that he started talking to people again — not just anyone, but military friends. And for the next six months, as he trained for the tough mudder competition, it brought purpose back to his life.

From there, he found CrossFit and then Rush Club.

“Our reason for existence at Rush Club is to touch, move, and inspire people to action,” says AJ Richards,

In 2013, Richards, a fellow veteran, who also found himself returning from war depressed and in need of inspiration, founded Rush Club. It is a head to head weight class competition.

Athletes who compete on the Rush Club stage are some of the fittest on the planet. Whether able-bodied or adaptive, their grace, speed, and strength is amazing to witness — in person or streamed on the web for all the world to see.

“We are the first place in history to give adaptive athletes a place to be recognized,” Richards says.

Derek Weida is one of those adaptive athletes. Not only has he found purpose, he has also found fame (something he wasn’t exactly looking for).

Weida’s inspirational message of moving forward is contagious.  He founded The Next Objective, “a combat veteran-run initiative committed to empowering our returning service members to overcome obstacles and achieve post-military success.

Weida, who makes a point of saying that the VA treated him remarkably well throughout his lengthy recovery, doesn’t want anyone’s sympathy.  His story is all about strength.

He inspires his more than 500 thousand social media followers every day to #neversettle. 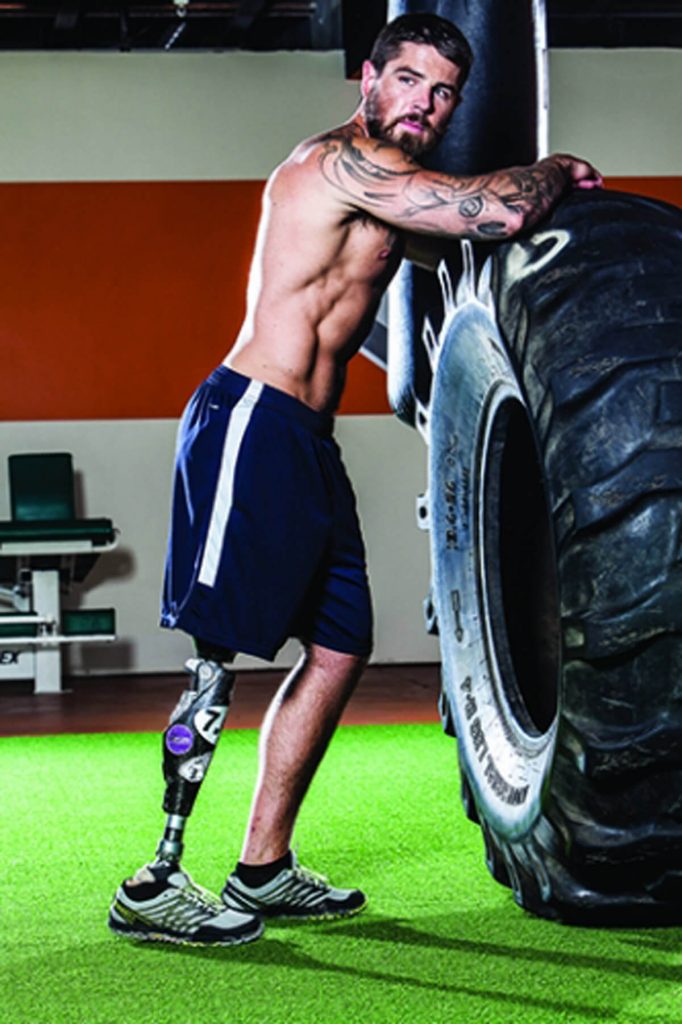